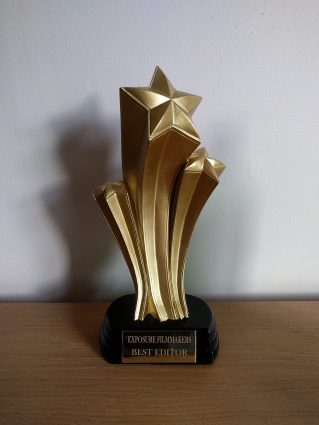 Twenty teams of up to six crew members were given 48 hours to create a short film of four minutes or under, incorporating the theme of ‘Artificial Intelligence (AI)’. Filmmakers from across Hampshire from all backgrounds and levels of experience took part.
The films received positive reviews from the panel of judges, which included Perry Benson (Benidorm, This is England), screenwriter Richard Kurti (Robin Hood, Primeval) and filmmaker Peter Hearn (Dead Air, Scrawl starring Daisy Ridley).

Wessex Films have been awarded six awards: Best Screenplay went to the Dream Team for ‘Brian’ and the award for Best Director went to Pippa Short. Best Cinematography went to Leo Barton for ‘A-1’ (Team Adapt) and Best SFX went to Team Adapt and their film ‘A-1’. Best Actor went to Iman Bahmanabadi (‘A-1’ – Team Adapt) and Best Actress went to Pippa Short (‘Brian’ – Dream Team).

Cameron Meldrum, our Vice-President Democracy and Creative Industries, says “I am very proud to see our societies doing so well at Southampton Film Week, and it’s great to see them being rewarded for the high-quality work they do! With all these recent successes in the Union’s media outlets, now is a fantastic time to get involved!”

Julien Mathus, President of Wessex Films said: “There are no words strong enough to describe how proud I am of our victory at the 48 Hour Film Challenge. We came back with six awards, and nominations for almost every category. This shows how dedicated and passionate the members of our society are”

More information about the competition can be found at exposurefilmmakers.yolasite.com.