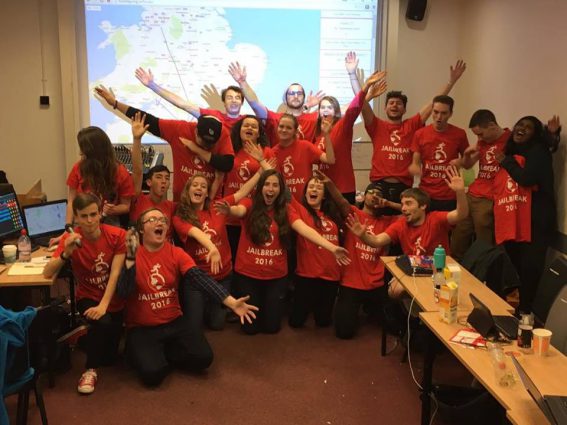 RAG (Raise and Give) Society and Enactus Society raise an estimated £5,400 for charity during Jailbreak 2016, with one group of students travelling as far as The Gambia in under 36 hours with no money.

Jailbreak is a challenge where students aim to get as far away from the Students’ Union as possible in 36 hours using none of their own money in a bid to raise cash for charity.

26 teams made up of 63 students participated in this year’s event, each with a minimum fundraising target of £150 that students had to raise before departure last weekend.

Dennis Cai Burnham, and Jordan Williams, student made up team, ‘The Bailers, who travelled the furthest, reaching The Gambia in under the 36 hour deadline. The second furthest team travelled to Gran Canaria, with other teams reaching France, Denmark and the Netherlands.

RAG member and Jailbreak organiser, Jarvis Stanton, says, “It was an incredible two days that raised a huge amount of money for three very worthy causes. A massive thank you to all the participants, volunteers and everyone who donated to the teams”.

Action Against Hunder, Alzheimer’s Society and HCPT Group 170 are RAG’s nominated charities for 2016, which will benefit from the total raised.