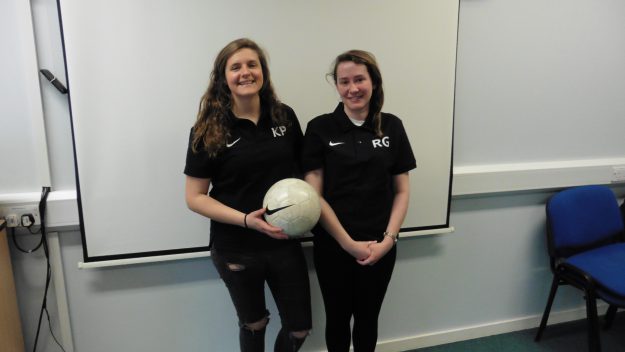 Last week we spoke to Katrina and Rachel, the President of the Union’s ladies football club (SULFC) and the 2nd Team Captain, following the start of the BUCS and FA outreach programme.

The newly established scheme, organised in collaboration with our Union, allows the team to deliver free football lessons to local schoolchildren across Southampton. Find out what the ladies had to say here.

How did you go about setting up the programme?

Katrina: Myself and Jack, the Athletic Union Officer, started the programme. I think he was contacted through BUCS as there was some funding to start this programme as there’s nothing like it in this area for young girls to encourage them to get involved in football, but there’s a lot for young boys. We had contact with Hampshire FA and BUCS, to set it up originally and it’s gone from there. We started 2 weeks ago; so far we’ve got four schools on board.

Did it take quite a while to set up?

Katrina: We started I think in October last year and it’s only just started so the process has been quite long to apply for the funding, get us all DBS checked and contact all the schools!

It must have been really exciting when it all got finalised…

Rachel: Yeah it’s a great opportunity. We had a workshop session teaching us how to go into schools and coach. I’ve done sports leadership before, but not in football. You can carry across the leadership skills but this workshop was specifically designed to teach us how to coach football – it benefits us as much as it benefits the schools.

Katrina: After Easter we’re going to do our Football Coaching Level 1 with Hampshire FA so that’ll give us more experience. All the girls jumped on the opportunity to improve their skills and learn to coach.

It’s known that it can be quite hard to get girls into sports. How do you feel about campaigns such as This Girl Can?

Katrina: It can be hard to get girls into football if they haven’t played before but the club is growing – in my first year to now the numbers have doubled! Related to the campaign we did a taster session to get girls who aren’t part of the society to have a go and that saw quite a few numbers. We’re setting up a Development Team which will appeal more to people who haven’t played before.

Do you collaborate with any other clubs and societies?

Katrina: Last year we had a day where Ladies rugby played us at football and we played them at football and then went out on a social in the evening. We’re planning to do another one soon as it’s great fun and a chance to try new sports. When other teams do fundraisers we always support them. We haven’t done much with Men’s Football but hopefully we will in the future.

Rachel: We also play alumni which is good fun too!

You must be pleased with the results from Varsity…

Katrina: It was a really good day, the football team won 3-0.  I’ve been here 3 years and it’s the first time we’ve won it!

What’s the best thing about being part of the club?

Katrina: For me it’s about fitness, making friends, doing something I enjoy. Alongside studying being part of the club is the most important thing. If I didn’t join the club I would be in a completely different place. I don’t think I would have enjoyed my time here as much.

Rachel: I don’t think I could academically do as well if I didn’t have football. I need something to do which takes my mind off work. We always train on Monday, have a match on Wednesday and get together and go out the night after the game.

Katrina: We’re going to watch FA Women’s Cup Final in couple weeks, which is good as not everyone drinks or wants to go on nights out. Anyone who wants to come along do – we’re all really friendly! There is a certain commitment level but other than that we’re really laid back.  Come along, come to training, come out on a social, and see what you think!

To find out more about SULFC and to register your interest, check out the pages below: