AU Ball: A night of celebration 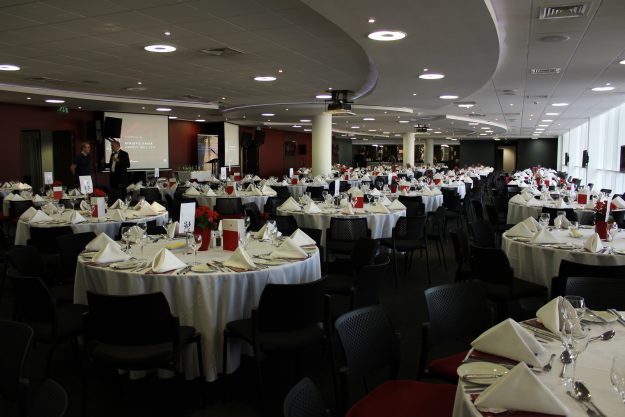 The night was”buzzing”, with students enjoying a three course meal, followed by the awards and an after-party with our resident DJ, Drop Division, who played until the early hours.

Our Vice-President Sports, Tom Provan, gave a speech praising the teams and commented on winning Varsity to lots of woops and cheers.

We caught up with students who attended the night to ask them their best tips for students thinking of getting into sport while at university. Claire and Issy, from Ladies and Mixed Lacross respectively, said how the team was “very inclusive and welcom[ing to] all ages and people”. Both would like to carry on playing Lacrosse post-university. Their advice for someone getting into sport is “Join, even if you can’t do it. Have a go!”.

Students Mark and Paul who play Tchoukball, said that they find the sport “easy to get into and … fun”. Their favourite parts of this year have been Varsity and the first game of the season as they were able to see all the new players getting involved and having a go. They came along to the ceremony to watch the awards because they knew someone who had been nominated.

The social aspect of playing a sport in Team Southampton was a common theme of the night with many students saying that they joined to make friends.

You can view the professional photos on the Team Southampton Facebook page, courtesy of David Evans and Alex Wright.

Congratulations to the following students won awards on the night:

Most Improved Team of the Year: Tennis Club

Sportsman of the Year: Alex Teuten – Athletics and Cross Country

Team of the Year: Trampolining Club