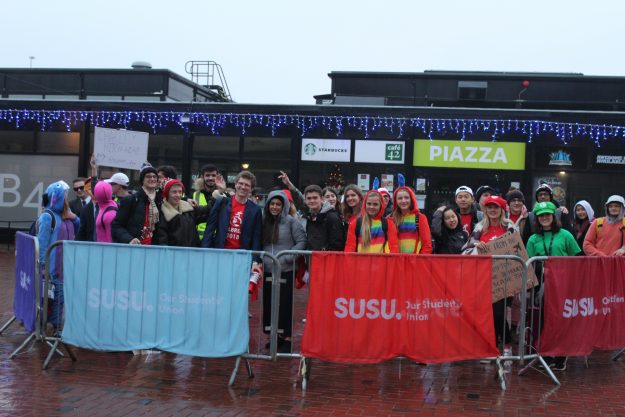 Student teams started off from rainy Southampton at 8:00 AM Saturday morning and raced across the country to catch lifts, trains and flights in a bid to get as far away as they could in 36 hours, all in the name of charity. Organised by our amazing RAG, this year, groups are raising money for three charities, Yellow Door, Anthony Nolan and Help Refugees.

Team ‘Apples in Wanderland’ managed to catch a flight to New York from Heathrow on Saturday putting them in the lead early on in the game. While fundraising for their travel costs Ana and Lucy also managed to separately raise £130 to go directly towards the total for the Yellow Door, Anthony Nolan and Help Refugees.

Runners up managed to travel to Iceland, Tenerife and Marrakesh.

RAG President, Jan said: “This year’s jailbreak has been amazing. It was an intense 36 hours but we’re all incredibly glad with how it went. We had some really cool destinations like Tenerife, Morocco and Milan and we’ve never had anyone get to America as well, so it was amazing the girls managed to get that far.”

Students, family and friends followed their journey’s across the globe on social media, with Wessex Scene and Surge Radio also keeping everyone updated. “They kept us slightly sane in Jailbreak HQ” Jan says. “We want to say thank you to all of the sponsors, friends and our participants for helping us raise an amazing amount of money for our core charities”

The current fundraising total is £2,433.20 however, the team’s own funds have yet to be added and donations are accepted until Monday 31 December. Add your own donation by clicking here.

If you missed all the live action, you can catch up with Wessex Scene’s live blog here.