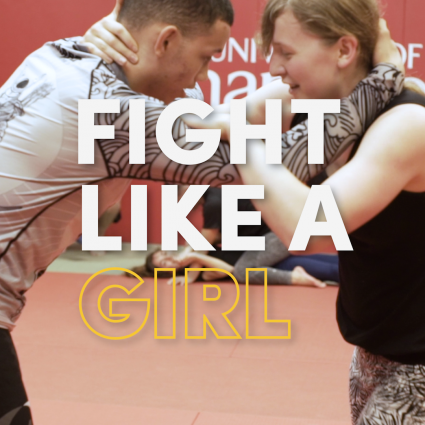 This week is Women in Sport Week, an annual week with free sports taster sessions, guest speakers and sport challenges to break down barriers, challenge gender stereotypes and celebrate our amazing women in sport. This is Laura’s story.

Laura’s first taste of martial arts was in her local karate hall in rural Essex where there was just seven other members, three of them members of her own family and also two 80-year-old men. “I didn’t get the best experience of martial arts and defending myself ” smiles Laura. “Even though I felt capable, I don’t think I actually was.”

After coming to University of Southampton and wanting to try something new, Laura tried Brazilian jiu-jitsu during Freshers’ but it wasn’t exactly love at first sight. “I wasn’t used to it” explains Laura. “I’m not used to being pressed up against someone I barely know but as I kept going it grew on me. It’s all about technique and leverage” she goes on to say. “So you can defeat someone who is much bigger and stronger than you. It really appealed to me, as a small, not that relatively strong girl, to be able to submit guys that are huge and their bicep is as big as my head, it’s really satisfying and I just found it really fulfilling.”

However, the physical closeness of the sport took some getting used to, “there’s definitely an adjustment period” says Laura. “The first time that I did it, thank God, I was with this girl Chloe and we just really clicked as friends immediately and so it wasn’t so awkward being you know, face to face, crotch to crotch with a stranger” Laura laughs.

Although Laura had some experience with karate, it took a while to get used to Brazilian jiu-jitsu: “I’d just be laying there like ‘I don’t know what I’m doing, I’m just trying not to get injured.” However, within a few months Laura was the one submitting them, “I can say I can defend myself because I genuinely can.” Laura has had her fair share of people doubting her but fast-forward to today and Laura is now the Women’s MMA Captain and recently won her first gold medal. “It’s so satisfying, there’s nothing better than someone who underestimates you because you’re a girl, because you’re weaker and smaller and then completely flip that on its head and say ‘you should be scared of me, I know all of these things and I know all of these moves and you can’t stop it.”

But underestimating women could be having a big consequence on female participation in sport. According to insure4sport, only 25% of women in Southampton do regular sport and only 9% have considered a career in in it. So what does Laura think is stopping women from getting involved? “I think there’s this big thing about looking to muscly” Laura explains.  “I know when I was doing sport and when I started getting in to the gym, as I was putting on muscle, my parents were like ‘Laura, you don’t want to look like a female body builder, you should stop going to the gym’. That was definitely, for me, a big hurdle. Even if you try and not have it affect you, if your parents are saying ‘you don’t want to look like a body builder, don’t get too muscly’ it does get to you a little bit.”

Although the figures in areas such as Southampton are low,  it has been reported that female participation in sport is on the rise. However, for Laura, we still have a way to go in changing people’s attitudes. “When you get the new guys that come in and they’re like ‘you’re not going to submit me, you’re a tiny little girl and I’m like 6ft 3” and I’m like build like a tank’. You do get that quite often and I think that’s sad. There’s still a big stigma.”

“I’ve always been more of a tom-boy, so I was always really in to sport, running around and playing with the boys, running around in mud and everyone said ‘Laura, you’ll grow out of it, you’ll be more girly’ but I don’t want to be more stereotypically girly, I just want to be me. I want to have fun and do what I enjoy doing. The fact that women don’t get into sport because of that, I think it’s really sad because there was a point where I thought maybe I should stop getting involved in sport and maybe I should ‘reign it in’  but at the end of the day, just do what makes you happy.  It’s not mutually exclusive, you can be girly and you can do sports.”

But it isn’t all just about keeping fit and making friends, for Laura, Brazilian jiu-jitsu can also save your life. “It’s just really important for girls and for guys just to learn the basic techniques of what to do if someone grabs you, what to do if someone is trying to take you into a car, what to do if someone has got you pinned to the floor. Situations that we hope we’re never going to put in, but if we are put in, it’s so much better to know what to do and how to cope with it.”

“I hope that girls aren’t afraid to do what they want to do despite what other people say because at the end of the day it doesn’t really matter if what you’re doing is fighting or dancing or anything in-between, as long as you’re doing something that you enjoy and that you feel helps you – go for it.”

Get involved in Women in Sport Week. You can find the full timetable of free activities here.