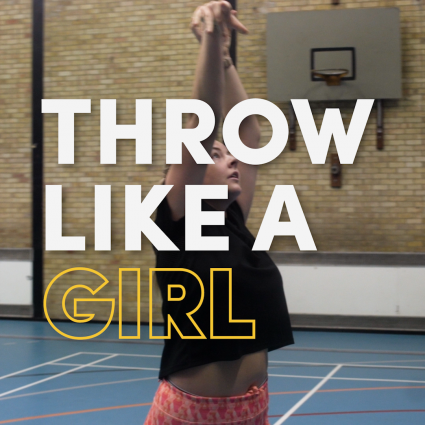 For both girls, netball has played a major part in their lives, “it’s just so empowering to play with such good female athletes” says Rianna. “It’s just really fun every week going to meet your friends to play netball. I used to do it all weekend when I was young. It just took over.”

“Yeah same” Georgia agrees. “It’s a good energy release. I think it’s great to be a part of a team”.

But for a lot of women, school P.E lessons will have been the last time they played a game of netball. “It’s definitely the exposure on TV” says Georgia.  “Although, netball is becoming quite dominant on the TV. Sky Sports, they’re actually showing it but before it was just football, football, football.”

“People at work, after the Commonwealth would be like ‘it’s actually so good, I watched it and it’s amazing’. I think the more people watch it and realise how intense the match can be, that’s going to help so much more” explains Rianna.

And while it is true that netball is booming, there is still a way to go. “We’re still not in the Olympics” says Georgia. “The Commonwealth give us a ground, that we are good enough.” The same can be said for a lot of sports. “women’s football and women’s rugby is just as underexposed at netball.” says Rianna. “There’s still a way to go but it’s getting there.”

Georgia and Rianna believe that both women and netball being underestimated has a lot to answer for. “Even in the gym, you hear ‘you can’t lift as heavy weights as men’ but you can” says Georgia. “You can do it.”  And netball? “It’s not just running around catching and throwing, that’s what people think” says Rianna. “Netball as a game, you have to use your brain.” says Georgia. “Everything is thought through. The passing – it’s all about using your brain and being agile and being fit.”

But it isn’t all about the fitness. Netball has created a family from home for the girls too. “In first year it can be hard being thrown into Halls and maybe just don’t get on with who you live with which is what I had I just resorted to netball because it’s somewhere I felt comfortable, like I could be myself” explains Rianna.

Georgia agrees, “without netball, today I wouldn’t be the person I am today. I’ve played since I was 8. I still play every single day now. I just love it as a sport, I love the people and I think it’s such a community whether I go home, whether at University, everyone is just so nice.”

Get involved in Women in Sport Week. You can find the full timetable of free activities here.