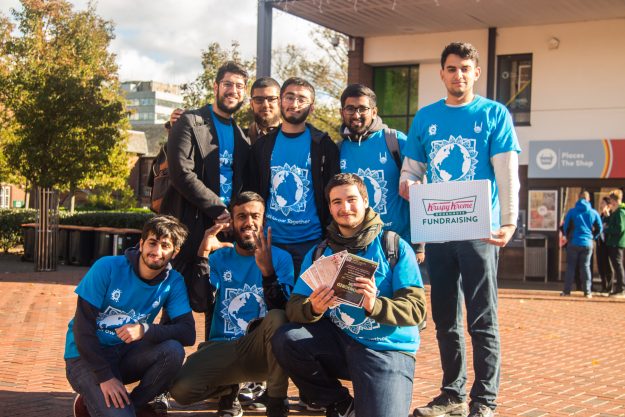 The team received two awards from Islamic Relief for their recent Charity Week fundraising after they raised an incredible £17,743.37.

Islamic Society received the Crystal award for the ‘most unique event’ after they held a plant sale on the Redbrick, as well as being awarded the ‘best display of unity’. “This is considered to be the most prestigious award, which we received for our Reading vs Surrey vs Southampton charity football tournament” the team says.

Charity Week is a global initiative by Islamic Relief to raise money for orphans and children in need in 7 countries worldwide; the money raised this year went to a variety of different projects in Mali, Syria, India, Afghanistan, Pakistan, Somalia and South Africa.

“we’re honoured and proud to have received the award”

Although Charity Week officially only lasts for a week, this year Islamic Society ran two weeks of daily events. “You might have seen our bake sales, henna stalls or volunteers selling Krispy Kremes around the Redbrick. For the first time ever, we also had our own collection pots in the SUSU shop so thank you to everyone who donated to those”. Islamic Society ran a wide variety of events, from football tournaments to treasure hunts, quizzes and games nights. “Our 3 standout events, were definitely our plant sale, sponsored 5k run, and dinner/auction, where we hosted spoken word artist, Aadam speaks and raised more than £5000”

“We’re very thankful to be able to say that we had 80 volunteers, without whom we wouldn’t have been able to accomplish everything we did” they said.  “This year we auctioned a cake at our fundraiser dinner for £3,500 and raised £17,743 overall, which is the 3rd most raised by any institution in the South.”

After being inspired by this year’s theme; sustainability, Islamic Society held a plant sale for the first time which was a huge success. They said, “the plant sale has been one of our greatest achievements so far this year, our event being said to having ‘revolutionised charity week’, and we’re honoured and proud to have received the award.”

What’s to come for Islamic Society? “We’re hard at work planning events for semester 2- all we can say is expect big things from us”. The group will be running some refreshers socials as well as running weekly sports events, talks and regular socials”.

As well as all this they also have another two campaigns to look forward to this year. “First, we have Believe and Do Good, which is about spreading small acts of kindness in the community-we’ll be organising events throughout February to make it easy for everyone to get involved so we can make the community better together. Our second campaign is Discover Islam Week, where we’ll be inviting prominent and influential speakers to tackle misconceptions and raise awareness- we’d love to see other societies and students there.”

Got some good news to share or want your club or society featured? Send us a message.