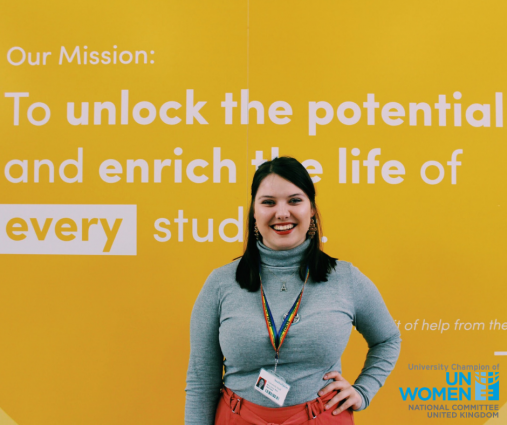 The Union is proud to be joining a network of students across the country who are raising awareness for UN Women, the only global organisation dedicated to gender equality and the empowerment of women and girls.

By joining the network, and taking the lead on these campaigns, SUSU will be able to have a big impact both on campus, as well as throughout the UK and across the world.

UN Women UK approached VP Communities, Emily about the new University Champions Network and asked her to be a part of it. The network aims to bring representatives from UK universities together to work on projects to further gender equality both in our own institutions and nationally.

This includes things like their HeForShe campaign which is a solidarity campaign for the advancement of gender equality, initiated by UN. Its goal is to achieve equality by encouraging all genders to partake as agents of change and take action against negative stereotypes and behaviours. UN Women UK recognises the important part young people play in making social change and is, therefore, bringing us together to unify our voices for a more powerful impact.

“I am so excited to be working with UN Women UK as part of their new University Champions Network. At Southampton, we have been doing some really positive work around gender equality. In March, for International’s Women’s Day, we held a workshop which aimed to encourage and empower young women to get involved in UK Parliament and politics and in November we had our very successful Transgender Awareness Week. However, we still have a long way to go. It’s really important that all genders feel included in this discussion and recognise that we need everyone to work towards achieving true gender equality in our society. Young people have a very powerful voice and are vital in helping to bring about social change. I look forward to representing Southampton in this network and coming together with representatives from other Universities across the country to unify our voices on important gender equality campaigns and projects.”

Find out more about UN Women UK by clicking here.