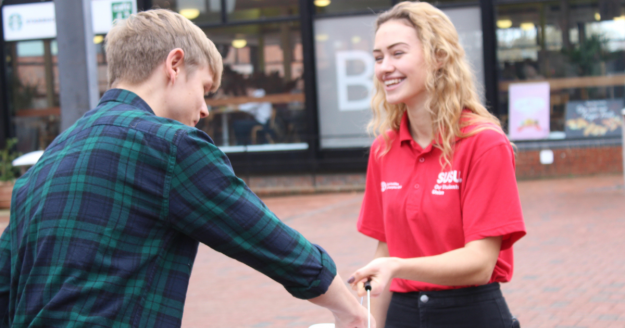 SUSU has donated a record-breaking £235,313.63 to charity over the 2018-19 academic year! This total was achieved through student fundraising and SUSU’s Raise and Give (RAG) Group.

The donations have benefited over 35 charities including Help Refugees, Anthony Nolan, Yellow Door and Trinity Winchester. The total was raised through a variety of events and activities students could get involved with, such as mountain treks, bake sales, quiz nights, 10k runs and much more.

Fiona Sunderland, SUSU’s VP Activities, says: “I’m absolutely amazed by the record breaking total raised this year. A massive congratulations to all those involved and thank you to everyone in RAG for your tireless efforts, it has really paid off. I look forward to working with you this year and supporting your amazing work.”

Following our total announcement, Yellow Door said: “Yellow Door were thrilled that the students of the University of Southampton voted for us to become one of their 4 core charities for 2018-19. We are extremely proud of the collaborative work we have done with them over the course of the year and can’t thank the students enough for the much needed funds they have raised towards the work that we do here in preventing and responding to those affected by domestic and sexual abuse (DSA).”

As voted for by University of Southampton students, SUSU’s core charities for 2019-20 will be Medicins Sans Frontieres , Alzheimer’s Society, Solent Mind and Naomi House & Jacksplace.

Watch this space to see if students can beat their total again next year!

Stay in the loop with what’s happening! Follow us: