Lecture capture? Have your say! 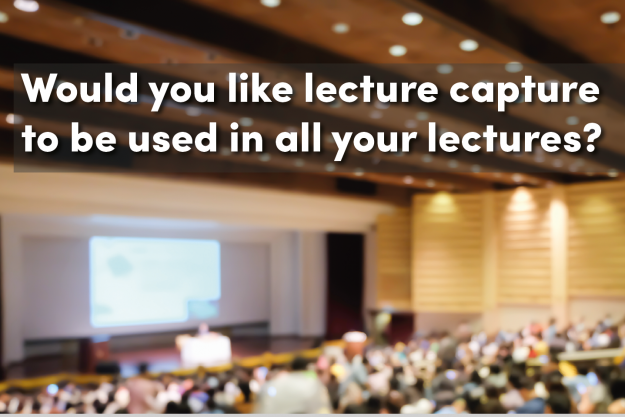 You can find the survey here.

Universal lecture capture has been an on campus issue since we conducted a similar survey in 2015/16. The results of this were overwhelmingly in favour of lecture capture being introduced. However, due to a number of reasons, including push back by some lecturers who feared that it might endanger their jobs, the University has yet to enact such policy.

Times have since changed. Read VP Education and Democracy Jo Lisney’s comments on why she thinks this survey will succeed where others have failed.

The way students are consuming academic material is changing. Students are utilising online resources as their primary source of information and communicating with their lecturers through the use of email and video conferencing. The question should therefore be asked as to why lectures aren’t freely and readily available to listen back to when every other academic interaction can be conducted online. Our University is particularly bad at doing this and there has been push back in the past to utilising lecture capture as a means to augment the student experience.

And that word augment is very important. Lectures are the bedrock of the learning experience while at university. This isn’t about replacing classrooms full of students, this is about providing them with an additional resource. Imagine you are in a lecture but you don’t quite understand something. If you could access a recording of the lecture then you would be able to listen back as many times as you need in order to give yourself a better understanding. What if you are ill and unable to make a lecture that week? Having a recording would simply prevent the punishment of you missing out on important parts of a degree you pay so much money for. What if you have a disability which prevents you from attending lectures on occasion? Again, lecture capture prevents you from being punished for reasons you are unable to control. Lectures should not discriminate, and the survey hopes to counter this by providing the basis of an argument for equal opportunities to all.

In a study conducted by researchers at the University of Leeds, 85% of respondents, representative of both Undergraduate and Postgraduate students, said they would sometimes or often utilise lecture capture recordings to augment their studies. This survey wants to find out whether you feel the same way.

Lecturers do have every right to fear that students, knowing their lecture is being recorded and will be accessible online, might opt to not attend lectures. The same study should calm some of those fears. Researchers found that, throughout the 2017/18 academic year, attendance when lectures were not captured averaged 86%, whereas when lectures were captured this dropped to 81%. Though this does constitute a drop in attendance, it is hardly a significant one. Lectures were on average still attended by around 4 out of 5 students and this should do something to alleviate any fears that lecturers might hold.

Other arguments that might be used to dissuade any change from the status quo include that lecturer’s work might be copied and illegally sold online (breaching academic integrity) and the extra server space necessary to store all of this information being prohibitive. SUSU and the University would need to work together to remove these fears and stumbling blocks and as an organisation we are open to this.

Should you again decide that lecture capture is something you would like us, as your representatives, to push to the University, we absolutely will. However, our aim is not to force lecturers to take on this approach to their teaching, but instead to have a system were they can opt in which would hopefully convince other lecturers who were initially sceptical to participate. Were you to support this action, and the benefits to the University then be seen, only then might a similar push be made to make lecture capture mandatory across all campuses.

Remember, you can participate in the lecture capture survey here.