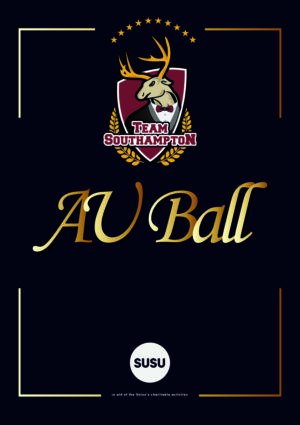 Congratulations to all our awards winners and Athletic Union Colours recipients in the Athletic Union Ball 2020. Team Southampton has seen some incredible sporting successes this year and we are so pleased we could still celebrate them all with you. If you missed the ceremony live, you can catch up here…

Full Colours are awarded to an individual if they have represented their sport at an international level. Our winners are…Canoe Club – Matthew LamontRifle – Jacob Hill

Kai Major – Table Tennis Club “Kai has been praised for his hard work and dedication to the club. Without him, the Men’s 1st team wouldn’t have finished in the top division 1, so that’s a very impressive feat! The Men’s 1st team also made it to the quarter finals of the national trophy, and Kai’s led warm-up routines for the team on numerous occasions. His enthusiasm for the sport is really admirable and is evident from his 4-5 times a week training schedule so we’d really like to praise him.”

Rheanna Cottam – Netball Club“Rheanna’s been an invaluable member of the Netball Club for the 3 years she’s been a part of it. She’s gone above and beyond her job description and done it with enthusiasm. She’s done so much work and been in charge of social media, and never fails to celebrate other successes from other clubs. It’s because of her that the Netball Club did their first tournament against Women’s Rugby and now have a partnership raising money for Mind. She also set up the first mixed tournament involving friends and family and had massive engagement, and on top of all that she’s also been a Captain.”

Trampoline ClubMatt Plant from Sport & Wellbeing said: “Trampoline Club has developed close links with Southampton City Club over the years and many of the student coaches are also coaching for the City Club in their spare time. This has helped develop the profile of the club outside of the University and has also provided the opportunity for our members to gain extra training time outside the allocated time at the University, as well as access to a wider network of coaching. The club has excelled in the leagues since it began, always finishing close to or at the top of the leader board. Outside of the University circuit they also take part in the Southampton Schools Competition each year, highlighting to children in the region the potential of the sport and where it can take them. This event also help to raise the profile of University clubs to a wider network and showcases the abilities of the club for the wider community to see.”

Sports Personality of the Year

Matthew Taylor – Men’s Football Club
“The club are delighted to nominate it’s President for AU Sports Personality of the Year. Being President for 2 years means he fully embodies what the club, Union and University values. Huge levels of organisation, commitment and planning is needed to successfully run a club of 75 members as effectively as Matty has done. Across his time at University Matty’s managed his own external sporting commitments where he plays at a semi-professional level whilst running the club and participating in the University’s 1st team, achievening a promotion, the highest place finished in 7 years and a national trophy final. Despite his love for the SUFC, Matty plays for the University Cricket 1st team, showcasing his well-rounded ability as a sportsman. Matty has developed extensive links across the AU which he utilises to arrange inter-club events, moving SUFC training and matches to accommodate the needs of other AU clubs. During his 4 years, he has exemplified everything the Sports Personality Award is about; by winning Fresher of the Year to being voted as President for 2 years. His contribution to the club and wider AU family in his 4 years at Southampton is outstanding and deserves recognition.”

Emily Feist – Ladies Lacrosse Club
“Emily has been a very active member of Ladies Lacrosse throughout their whole Undergraduate degree, their Masters and even their PhD here, so they’re really an outstanding member of the Lacrosse community. They even teach sessions within the wider community outside of the University, and it really provides everyone the opportunity to get as much coaching as possible and to really dive into their sport. She started playing in her first year as a beginner and then went on to become the freshers coach in her third year, became President of Southampton University Ladies Lacrosse in her fourth year, and then throughout her PhD continued coaching both the freshers and second year teams – so she’s really, really done fabulous amounts of work for the community.”

Sports Volunteer of the Year

Jenna Ann Smith – Riding Club
“Jenna has been on the committee for two years in Riding club. She started off coordinating all the lessons for beginners in the club, running lessons pretty much every day of the week or organising them, effortlessly catering for everyone. She then took over as President this year. When she took over the club was struggling with quite a bit of debt and she’s managed to completely turn the club around, so much so that she’s now been able to start looking at lowering costs to make the sport more accessible for people from a wider range of financial backgrounds, which has been really good to see.”

Most Improved Team of the Year

Football Men’s 2nd Team
“After being relegated the last two years this team has shown some great improvement throughout their performance this year. They have come second in their league overall with the guidance of the Captain, Ryan Hill, and have also gone on to be the only team that have defeated Solent within their league. Hopefully they can keep up the same kind of progress next year, and we look forward to see what they can achieve within this time.”

Sportsman of the Year

Matthew Lamont – Canoe Club
“Matthew is national British Champion for his sport. Some highlights from Matthew’s time with Canoe include coaching weekly pool sessions, leading less experienced kayakers on the white water, being part of the committee and winning the Hurley Classic, which is the world’s largest freestyle competition.”

Sportswoman of the Year

Georgia McKay – Netball Club
“Georgia has gone above and beyond as the President of Netball Club, dedicating her time to her sport and developing as a player, becoming a recognised member of their 1st team. Throughout her role as President she’s created a very safe and welcoming environment for her girls and also overcome challenges that were faced by the club throughout the year.”

Team of the Year

Ladies Lacrosse 1st Team
“Ladies Lacrosse 1st team have dominated their league with victories such as 30-0. They recently beat Exeter in the Western Conference Cup final to get promoted for the 2021 season, and have had players representing Wales, and other regional and national teams. As well as playing at a very high level they’ve also trained up as umpires and coaches in order to support the development of talent within the rest of their club.”

The Special Recognition Awards are awarded to individuals who have worked incredibly hard over the past three years within their respective clubs. Our winners are…

Outstanding Athlete of the Year

Matthew Lamont – Canoe Club
“Matthew is the current British Champion in Men’s Surf Kayaking for 2 years in a row, and placed 9th in this year’s Surf Kayak World Championships in Peru. He qualified for the Men’s Expert Level Annual Freestyle at the National Student Rodeo, the defacto national university freestyle kayaking championships. He won the team event at the Hurley Classic with the Canoe Club – the Hurley Classic is the largest freestyle competition in the world and attracts world class athletes. He reached the K2 Duo Freestyle finals at NSR and he consistently plays his first in the Expert Freestyle class at Varsity.”

Table Tennis Club
“For a second year in a row, Table Tennis has earned the most BUCS points for the University, becoming 3rd in the UK for their sector. They’ve also, again, seen league promotion this year for two teams. Each of their teams have performed tremendously throughout their leagues. Their Men’s 1st team finished top of division 1, Men’s 2nd team finished top of division 2, Women’s 1st team achieved 2nd in division 1, and Women’s 2nd team achieved 4th or 5th again in division 1. This club has really grown from strength to strength over the last few years and are beginning to be recognised nationally. The Men’s 1st team made it to th quarter finals of the National Trophy, Women’s 1st team to the National Trophy semi finals, Women’s 2nd team to the last 16 and to top it off their Men’s 2nd team won their Conference Cup finals. On top of that, they remain an incredibly inviting and accessible club, consistently open to new members, running tournaments and events to welcome new people. They’ve consistently supported AU campaigns such as Men’s Mental Health and Women in Sport Week, and have also consistently helped with AU promotion through their Team Southampton online presence and support for events such as Varsity.”