Society and Volunteering Awards 2020: The Winners!

In News, What's on 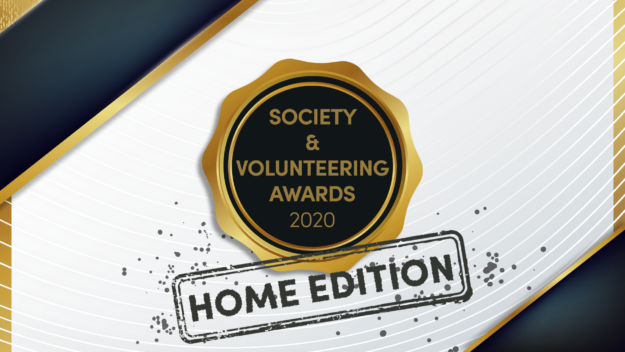 Huge congratulations to all our award winners and nominees in our first Society and Volunteering Awards! We are so glad we could celebrate all the amazing things our societies have achieved this year, and all the hard work and dedication from society members behind-the-scenes. If you missed the live ceremony, you can watch it below…

Southampton University Symphony Orchestra – Centenary Concert
“The Best Event award had many high quality nominations, making it difficult for the panel to pick the winner. SUSO‘s Centenary Concert however, held on 14 March, really stood out for its scale, impact and inclusion of the local community and SUSO Alumni. Despite the challenges of being held the day after the surprise end of term and only a week or so before total lockdown, SUSO brought together so many people to celebrate the 100 years of the society. The event was clearly a huge celebration of the history of the society, with opportunities for alumni and current students to look back proudly over the past programmes, posters and photos of the orchestra sating back to the 1960s. We had six nominations for this event which all demonstrated to the panel what a milestone this event was for the orchestra and society.”

Lily McDermaid – Disabilities Officer
“From the nominations Lily received, it was really clear she had worked incredibly hard this year, and did really well to raise awareness of lots of underrepresented groups. This year was the first time SUSU have really focused on this kind of topic and Lily has clearly made tangiable and measurable change within a year, both at the Union and the University. These are both large-scale and small-scale, short-term and long-term changes and Lily’s legacy is definitely going to continue. What was hugely impressive was the effort and planning Lily put into SUSU’s first Disabilities Awareness Week. This was held in January/February this year and it included coffee mornings, a visit from Board in the City, a Disability Sport panel, an in-person WIDE training session and a rainbow night. A highlight for our awards panel was the video Lily put together where several disabled people spoke about their experiences and all the different kinds of experiences they’ve had, even if they have the same disability or condition. This particularly raised awareness of invisible disabilities and it has gone a long way in making people aware of the different things people have to deal with, and has put it at the forefront of the welfare and community section of SUSU. Lily has massively cemented it in our plans going forward. One nominator wrote: ‘Lily has always contructively engaged with staff from the University to SUSU and in both represented the interests of students with disabilities in such a professional way. They’ve never been afraid to criticise or work with staff constructively to advocate for others when it comes to wellbeing and inclusion’.”

Singapore Society and Malaysian Students Association – Amazing Race 2019 and Inter-Society Sports Day 2020
“These events stood out to the panel for their uniqueness and committment to inclusivity. The hard work put in by both societies this year to make international students feel welcome in both the University and wider community is showed clearly through their nominations. The groups successes include building relationships, sharing cultures, and championing collaboration for the benefit of all. It was also great to see how their sports day held at Cantell school brought together over eight societies raising an amazing £290 for the Red Cross Bangladesh mission to empower women.”

Fundraiser of the Year

Southampton RAG – Fight Night 2019
Fight Night was the accumulative event of RAG‘s Movember campaign and raised over £18,000. Siobhan La Roche-Seeley, RAG President, accepted the award on behalf of RAG and said: “It would be a lie if I said that Fight Night was not one of the most stressful things that I have ever done! It was very touch and go, it took months of planning and there were times when I wasn’t even sure if we’d be able to pull it off but I’m so grateful that we did. We’d never attempted it as a RAG before, and it’s actually kind of new for our University, so we weren’t too sure whether students would be receptive or not, but they really were and we are so grateful. Mainly I just need to say thank you to SUABC (Southampton University Amateur Boxing Club) who did an amazing job at training everyone up, and the dedication they showed was incredible. They trained people who’d never even considered boxing before! I’m especially grateful to all the fighters as well for fundraising for individual causes, and to anyone who bought a ticket and contributed to our Movember total. The months of stress were so worth it and it’s such a big accomplishment for us, so thank you so much and I’m glad you enjoyed it!”

BioCycle
“BioCycle is a student-led food waste recycling scheme that’s been running since 2016. It aims to combat the lack of food waste options in Southampton by providing students and local residents with caddies for household food waste, which volunteers collect on their bicycles, often at eye-wateringly early times! They deliver it to Aldermoor Community Farm where it’s turned into fertiliser. BioCycle may not be new but what’s really impressed the panel this year was the tremendous drive to scale up and the recognition it’s received, deservedly, outside the University. This year BioCycle‘s 15 volunteers have provided caddies for over 130 households in Southampton, collecting over 2,500 kg of food waste. It’s been great for us to see how the project has been featured on local TV and radio stations, raising awareness of food waste. The fact the team have started to speak at events such as the Green Liberal Democrats Annual Conference and Green First also attest to their growing influence at a national level.”

Society Committee Member of the Year

Charlotte Colombo – Editor, Wessex Scene
“This was a very difficult category for us to choose a winner from, with a number of really impressive and high quality nominations. The effort put in by Charlotte this year to lead Wessex Scene in the face of numerous challenges, and the steps she has taken this year to enhance the experience of members, really stood out to us. This includes her work to improve committee welfare and ensure that Wessex Scene is an inclusive place for all to express themselves. This is evidenced by her efforts to collaborate with SUSU’s BAME Officer and Women’s Officer on special editions of Wessex Scene. Charlotte has clearly gone out of her way to create partnerships and learn new skills to the benefit of her society and members. This includes her work to secure funding through innovative means including crowdfunding, demonstrations and how she’s strived this year to ensure the survival and increase the impact of Wessex Scene through a difficult year.”

Society Member of the Year

Molly Ellis – Showstoppers
“Molly is driven, hard-working and goes above and beyond what is normally expected of a non-committee member of Showstoppers. Her committment is immeasurable, dedicating her time to multiple projects at once and standing in for roles as and when needed. She is always willing to take on extra tasks, always on hand to help support her fellow members and does all this while always maintaining a positive attitude.”

Thomas Edwards – Boldrewood Officer, Vice-President of First Aid Society and member of Cameroon Catalyst
“Tom has received a record 11 nominations for this award, the most of any of our categories. Each nomination clearly demonstrated his commitment to volunteering throughout his time at University. Tom is clearly passionate about giving back and is praised by his nominators for his altruistic attitude. As one person in a nomination suggested: ‘Tom radiates passion when he speaks about his volunteering roles and on any given day you can assume he’s done at least an hour of volunteering’. With Tom’s five years at University ending, it is evident to our panel he will be sorely missed by his fellow students. He’s clearly made a significant impact in representing students, making them feel welcome, and has contributed greatly to the development of our societies. All of these factors made the panel feel that he is more than deserving of the Outstanding Contribution Award.

Lily McDermaid – Disabilities Officer, President of Fandom Society, and Treasurer of Neurodiversity & Disability Society
“Lily has taken on a brand new role and shaped it to be long-lasting, self-sufficient and something that is able to create measurable change within the Union and the University. The events and initiatives that have been organised and contributed to by Lily have included the launch of the sunflower badges for hidden disabilities, Disability Awareness Week, and the WIDE training, in which they have engaged a broad community of students. What stood out for our panel is the fact that this is only one of Lily’s voluntary roles. She has also been involved in setting up the Neurodiversity and Disability Society, has been President and engaged with Fandom Society, and has contributed written articles to Wessex Scene and TABOU – the University disability magazine. Lily’s nominations for this award show how she has proven ability to face challenges and overcome them in a compassionate and constructive way. While there is still obviously a lot of work to be done in improving inclusivity and awareness across the University, Lily has truly paved the way with her work hopefully inspiring future volunteers.”

Siobhan La Roche-Seeley – Southampton RAG President
“Siobhan has spent her time consistently volunteering and fundraising for charity. She has taken on committee roles such as Big Give Officer and this year’s President of RAG. Siobhan has strived to grow the society, increase participation and strengthen partnerships with local community groups, other societies and charities. In her time with RAG, Siobhan has played a role in growing the University of Southampton’s student fundraising total each year. The nominations for Siobhan in particular draw attention to her willingness to innovate and develop the society. RAG‘s Fight Night event, which Siobhan led and put a month on planning and effort into, was highlighted as evidence of this. In her nominations what really stood out for the panel was her passion for RAG and the efforts she’s gone to in making the committee and members feel supported and part of a wider community.“

Society of the Year

Quiz Society
In their acceptance speech, QuizSoc said: “The QuizSoc committee is thrilled to have been nominated for this award and we’d like to express our thanks to all of the Quiz Masters in the society who have worked so hard to allow the society to run the events that we’ve put on this year. We’d like to thank all the people who have come to any of our events over the past year, be it our regular quizzes or one-off special events we’ve run. Without you, none of what we’ve achieved would be possible. We would also like to thank all the societies who have collaborated with us on a number of successful charity quizzes, including MindSoc, MNDASoc and JazzSoc. Speaking of societies, we’d also like to say thank you to all of those societies that took part in the inter-society quiz tournament this year. It was a pleasure to run it and I offer the sincerest of congratulations to our champions: SU Singers, and we look forward to hearing what you spend your prize money on!”.