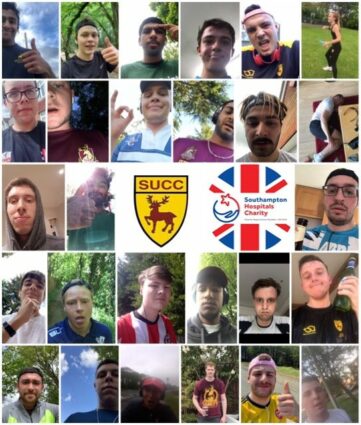 Matt Smith, SUCC Captain, said: “As a club we wanted to do our bit during this national crisis, so we decided to run where we were supposed to go on tour, which was Poreč on the Western coast of Croatia. The distance from Southampton to Poreč is 1535 km. But as we were making such good progress, halfway through the challenge we decided to do the return journey from Poreč to Southampton, which is a total of 3070km, over 2 weeks.
It was good to see lots of current and former members come together for all the frontline workers. We thought the charity we pick should be in Southampton where lots of us have made great memories and friendships. So, we decided on Southampton Hospitals Charity. We looked at some of the great work they had already done for staff at the hospital and we knew this was the perfect place for the money to go. The amount we raised was way beyond any of our expectations and will be used to help furnish the staff rooms at the hospital. As a club, we just want to thank everyone who has supported us throughout this fundraiser we really could not have done it without you”

Their JustGiving page is still open if you’d like to donate: SUCC run to Porec and back for Southampton Hospital Charity.