Sunday marks the biggest day in SUSU’s sporting calendar: Varsity 2015 this year it will be held at Portsmouth so make sure you make plans to watch Team Southampton as they #PlayToWin!

Last year Southampton excelled themselves to ensure they came out on top with an astounding score line of 204-64! The teams have been training harder than ever to retain the Varsity trophy and  we’re right behind them! Go #TeamSouthampton!!

Tickets are selling out fast so if you have plans of supporting your sporting heroes in person then you best act now to avoid disappointment!, If you’re unable … Read the rest

Representing YOU in Higher Education 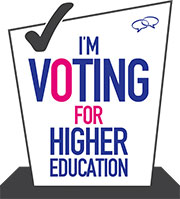 This morning, SUSU was on BBC Breakfast discussing changes in Higher Education; and whilst the nation is talking about how students are treated, we’re giving you a chance to have your say as well. Click here to see the story, including interview with Union President, Sam Ling.

This Friday, 5th October (tomorrow), at 3pm in the Bridge Bar, Surge Radio will be relaunching its topical debating programme, The Key Debate.

The first edition will be on current issues in higher education, including tuition fees and place allocation, with a range of different views and personalities represented on the … Read the rest