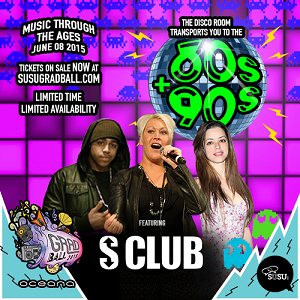 Over the past few months here at SUSU we’ve gradually been revealing the names of the incredible acts playing this year’s Graduation Ball! You’ve heard all about the mercury prize nominated Katy B, and chart topper Labrinth. And you know you can relive your favourite school discos with the help of B*Witched and Basshunter, and sing along to some CLASSIC pop with the help of our amazing tribute acts; but here at SUSU we have one more exclusive announcement for you. There is still one act left to announce for the ball.

This is a group that will make those … Read the rest

Tickets have now closed for the biggest annual event in the SUSU calendar, SUSU Grad Ball!

The glitzy celebration will be held at Southampton’s largest nightclub, Oceana, on June 8, where the 2,500 ticket holders will be treated to an eight hour party to beat all parties, featuring a star-studded line-up of performers reflecting the ‘Music Through the Ages’ theme.

Amongst the acts set to grace the stage at the hugely popular event will be 26-year-old star Labrinth, who shot to fame in 2010 with his breakthrough single ‘Let The Sun Shine’ before going on to release further incredible tracks … Read the rest

With just three days left to get your ticket for ‪#‎SUSUGradBall we’re pleased to announce that joining our line up of Katy B, Labrinth and B*Witched, Basshunter is our fourth confirmed act!

Basshunter AKA Jonas Erik Altberg rose to fame in the early 2000’s hitting the UK with the classic dance anthem “Now You’re Gone”. The song subsequently charted at number one on the UK Singles Chart, and stayed there for 5 weeks! At this time “Basshunter” was, on several occasions, the most sought after term on social communities (MySpace, Facebook etc) on a global scale. His YouTube … Read the rest

We’re half way through the ticket selling window for #SUSUGradBall tickets and due to the high demand, the online Box Office crashed! If you have tried to purchase your ticket online since Sunday (March 8) your transaction has not gone through, so please try again. Don’t worry, you won’t be charged twice.

Remember, you only have until midnight on March 22 to buy, so make sure you’re not a last minute buyer, to avoid disappointment.

Over the past week we’ve started to announce the acts, and so far we’ve announced that Labrinth, Katy B and B*witched will be playing the … Read the rest

So far we’ve revealed Katy B and B*Witched will be performing full live sets at #SUSUGradBall 2015, and now we’ve got another big name to announce!

Labrinth will be bringing his full live show of soul, pop and R&B to the ‘Music through the Ages’ themed event at Oceana on June 8 2015.

The talented singer-songwriter and multi-instrumentalist is best known for his collaborations with Tinie Tempah on chart-topping singles ‘Earthquake’ and ‘Pass Out’, as well as his soulful solo works like ‘Let the Sun Shine’ and his collaboration with Emeli Sandé, ‘Beneath Your Beautiful’, which … Read the rest

You already know about Katy B, but now we’ve got the exciting announcement of the next act appearing at #SUSUGradBall 2015!

In keeping with the ‘Music through the Ages’ theme, the nineties & noughties chart-toppers B*Witched will be performing at the summer bash on June 8 2015.

Renowned for their number one single, ‘C’est La Vie’ you’ll be able to relive your school disco years in style at the annual event held at Oceana.

All these exciting acts aren’t the only big news with Grad Ball this week though, if you head out to the Red Brick today (5 … Read the rest 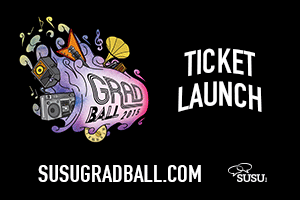 Releasing her first album, the Mercury Prize nominated ‘On a Mission’ in 2011, the BRIT School alumni has gone on to garner huge success with her singles ‘Lights On’, ‘Katy on a Mission’, ‘Broken Record’, ‘Perfect Stranger’ and ‘Witches Brew’, and released her second album last year. ‘Little Red’ topped the … Read the rest