A wave of new acts are being announced for SUSU’s biggest event this summer – the Graduation Ball 2014. This year, SUSU is aiming to go bigger and better than ever. We already have free rides lined up, with Dodgems, The Waltzer, and The Twister. This week keep your eyes on social media as we continue to make huge new announcements every day, with exciting new act confirmations. It’s been a big disappointment having Zane Lowe drop out, but we have already had great new acts announced during this week of big reveals!

SUSU President David Gilani said, “We have … Read the rest 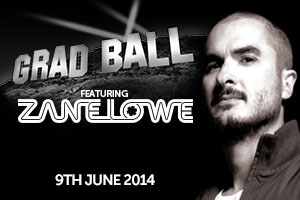 Zane Lowe will join our line-up of … Read the rest