SUSU Media – What Rules Should They Follow? Where Is The Line They Must Not Cross?

They do great work and provide a great experience for the students involved but also help to build up a community between all students at the University.

In the past however there has tensions between union officers and the writers/ presenters & editors over the content produced. The situation is often made more complex due to the fact the media departments are intrinsic parts of the union and hence the people ultimately and legally responsible for them (the sabbatical officers) may not always agree with what has been said about the union or indeed them.

I believe the problem has also be made worse by the lack of clear guidelines and rules on what content is legal or appropriate, who is responsible for what and what process should be followed when disagreements arise.

Therefore over the last couple of months I have be working on writing a code of conduct for the media departments. It sets out what is expected of writers, presenters, producers and editors and also their rights. My aim is to give the departments a strong voice to report on what is happening within the student community and the opinions of members whilst making sure they stay on the right side of the law as well as making good judgements on what to report on.

The code of conduct is going to be discussed (and hopefully approved) at media committee this Friday, 3 -5pm in the Board Room but I want to hear as many different views and suggestions as possible on how to make it better.

Therefore I am sharing a google doc in which anyone can look at and comment on. The committee will then disucss then suggestions on Friday and make changes. The more suggestions and collaborators, the better it will be.

The document is avalaible here: https://docs.google.com/document/d/1rYXn_U6hFrApZsqJfVITzPagNhWIvRb9no-g17ExoZs/edit

Much of the code is based on professional guidelines from the Press Complaints Commission, National Union of Journalists  and the Guardian but it is adapted for the students’ union environment we live in.

There are also several areas open to debate as to how the media conducts themselves.

For example should the media departments be impartial?  That is to say should they just express the facts of a story like the BBC. In this story on the BBC website it informs you as to what Mr Cable thinks but leaves it up to you to make a judgement.

Or should they be more like the news papers and direct the reader of viewer to a particular opinion. For example the following Sun headline makes it perfectly clear about how it thinks you should feel about bankers. 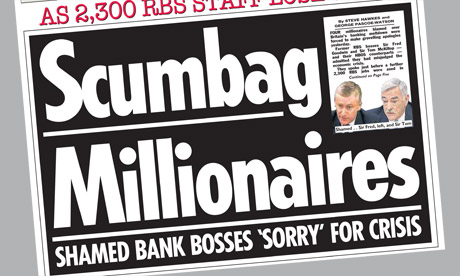 These questions do apply on a student union level. Should student journalists just report the facts, or take a stance which is in tune with what the union believes? or in fact should the editors and writers views be expressed which make be completely difference from the Union or University stance?

Much more information about the ethics and values of media and journalism can be found on the BBC College of Journalism website. http://www.bbc.co.uk/journalism/ethics-and-values/

All these are important questions and will shape the way  your media departments operate in the years to come so if you have an opinion make it known by commenting here, on the docuemnt itself or attending media committee on Friday. You can also email me personally if you have detailed suggestions, vpcomms@susu.org

One Comment on "SUSU Media – What Rules Should They Follow? Where Is The Line They Must Not Cross?"