Do Sabbs Actually Do Anything? – Union President

I have had such an incredible time so far this year, getting to work with SUSU and University staff, hundreds of student volunteers and the rest of the Sabb team (you can read their mid-year blogs here – Beckie, Dave Martin, Claire, Evan, Oli, David MW) on topics that I really care about… and hopefully they’ve made a difference to you too (leave a comment and let me know).

There are still plenty of areas from my plans that I’ve yet to make an impact on (postgraduate funding, financial barriers to student groups, halls fee waivers, student living-wage, SUSU job shop – but we do have 6 months left. Let me just reiterate how much I love this job – it’s incredible! If you’re thinking about running for any positions in the elections – just bloody do it! It’s awesome.

Removing Hidden Course Costs – The University now has a policy to show all course costs in module specifications. This means that students will know how much courses will actually cost – my aim is then eventually for these costs to be removed completely.

International Fees – DONE! The main project that I’ve worked on so far this year… to create a system where International Students actually know what their degree will cost them before they even come to Southampton, and then lobby the University to adopt it. Read all the details in my blog on the topic.

Bursaries for students – For the first year, the University have given all students who are entitled to a fee-waiver the choice to instead take a bursary. Informational material from SUSU has meant that a large proportion of entitled students chose a bursary. I’ve also worked with the University’s finance team to ensure that bursaries are the default option in future years, as all research shows that bursaries are more useful to students.

Student Loan Repayments – There was a scare over the summer that the government would sell off the Student-Loan Book (read more about this here) and change the rates at which students paid back their loans. Hundreds of Southampton students signed a petition as part of a national campaign, which got the government to promise that repayment conditions wouldn’t change for past students. There is still a lot of work to be done both nationally and locally on this issue, as privatisation of the loans would most likely create a long-term loss for the government and the Higher Education sector.

Creating more integrated Masters to help with Postgraduate Funding – Focusing the University to give more bursaries, rather than fee waivers next year – looking at the research findings to help adopt a Student Living Wage – creating a central place for students to get part-time jobs, SUSU Job Shop – developing a model for the University to act as Housing Guarantors for International students. 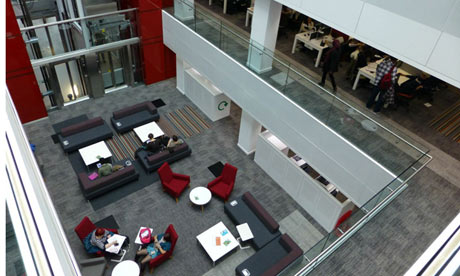 This is the Manchester learning commons, which we went to visit as part of our research

Student Centred Facilities – As part of the long-term work on the SUSU Masterplan, this year my focus has been on helping the University plan a multi-million pound investment into a new student centred facility – focused around places to do social learning, get personal development support and socialise. Unfortunately, the long timescale means that the brief hasn’t been passed yet at the University Council.

Student Funding Pots – I’ve focused time into helping various students around SUSU use funding pots that the University has available. Successful applications to these funds have already totaled over £100,000 and will allow SUSUtv to have new camera equipment, Sports Zone to develop a branding identity, Wellbeing Committee to run a mental health conference, various sports clubs to compete internationally, the Creative Industries to run a careers season and a few extra projects still to be announced 😉

Over-recruitment – This year, the University of Southampton recruited a very high number of students, which resulted in many issues for student facing services. Working with the University (alongside Oli and David MW) fewer students had lectures going on beyond 6pm than previous years (and all that did would have those lectures video recorded), and all twinned students wouldn’t have to pay any halls charges until they were given their own room.

Students at the Heart of Commercial

Photo Studio – A redevelopment of our facilities last summer meant that the photographic society lost their dark room, so early this academic year, we created a new photo studio for all students to use (curated by photosoc). On level 1 of the SUSU building, the room has already been used for various shoots including RAG’s naked calendar.

Grad Ball Committee – To help bring some new exciting ideas to the Graduation Ball, this year I gathered together 11 students from all over the University to create a committee. The group has been fantastic at helping develop themes / attractions / drinks prices / act ideas, so that the ball is just like the rest of SUSU, student led. These guys and gals have been incredible so far – big thanks!

Bath Students’ Union have microwaves, and soon we will too.

Project Pulse – Another area of direct student involvement in commercial this year was from the creation of Project Pulse. The feedback that the group gave led to very high satisfaction ratings from new students for all the Freshers’ events that we ran. Although the regular night did not work, this has been a trend in SUSU and many students’ unions for years and years. Our students just do not want a regular night club from SUSU. By realising this early in the year, we have massively reduced our entertainments costs, which usually loses us thousands.

Lads Mags – You might remember that earlier this year we stopped selling Lads Mags in the SUSU shop because all the remaining titles were just not selling. Some only selling a total of two across an entire year. This is really more of an achievement for our students, as they made the decision to not buy them… and I’m really proud of our students for that.

Microwaves – At one of the recent support-staff conferences, I got some feedback that students had been asking about places that they can use microwaves on campus, whilst we have one in the SUSU shop to heat up various products that you can buy there, we are lacking in food heating services that any student can use. Over the last couple of weeks, I’ve been sorting out the installation of microwaves in SUSU, and I was very happy to hear that there is a fair bit of demand for it too.

Housing Campaign – After dozens of students complained about letting agencies coming onto our campus – we got over 300 students to sign public pledges to not rush for housing – over 3000 students then liked these photos online, giving the album a total reach of over 60,000! – 5 of Southampton’s worst Letting Agencies signed our “Don’t Rush” pledges so they won’t be pressuring students next year – 2 MPs and 1 City Councillor pledged their support to the campaign – over 100 students shared our thunderclap promoting the January Housing Fayre, meaning that well over 1000 students got in person advice on the day. We’ve now just created 1 housing officer to help take this campaign forward for the rest of the year… and I am 1 happy Sabb.

Your Skills sessions – We’ve now created a running program of skills training for any student to take part in. This program, organised by our fantastic Training Manager, has helped dozens of students develop themselves and now can run for students every term. The sessions are back again this term, so spread the word to your society’s committee and come along.

Hack Days – To make sure that we’re engaging different students and helping them develop their skills, we ran a SUSU hack day, so that students studying ECS had a chance to feed back to our web team on the main areas of development. We’re looking to do more in the future so that students can develop relevant apps, and give constant feedback on how to improve our website.

Support Staff Conferences – We held the first ever support staff conferences so we could spend some time to build community and listen to all of our student staff. The conferences were really useful at helping students from different teams meet each other and they provided us with loads of feedback – that’s where I got the idea for microwaves in SUSU.

CMT Sub-Committee – One of the first things I did this year, as the chair of the Trustee Board, was to create a sub-committee specifically to look at our Communications, Marketing and Technology. From my previous role as the VP Communications, I felt that this was an area of the Union that needed to develop. This sub-committee is now chaired by our VP Engagement, Claire Gilbert.

Creation of SUSU Social Enterprise Ltd. – As SUSU grows and develops new enterprises like our Lettings Agency, we’ve had to create a whole new company. As a charity, SUSU can only trade with its beneficiaries (students) to a certain limit… as we are now making more income from our advertising, sponsorship, and other ventures like SUSU Lettings (which charges landlords, rather than students), we’ve created a new subsidiary company, so that we can grow our services further.

Thank you so much for reading. I’ve had such an incredible time as your Union President so far this year… and there’s still plenty more things that I’m going to make sure happen before someone else takes my place in July.

3 Comments on "Do Sabbs Actually Do Anything? – Union President"